This week we’ll do our usual weekly review of crypto security-related topics. We’re going to dig into the issue of conference OPSEC, or operational security, as we’re less than a week out from Ethereum’s flagship developer conference, and rumors swirl about security concerns in Bogota.

Moving on… Usually, we focus on looking back at crypto security-related events of the previous week. I thought maybe we could also highlight any relevant upcoming events each week.

A wave of Tweets and some articles surfaced questioning the safety of conferencegoers leading up to Ethereum’s flagship developer conference in Bogota, Columbia, next week.

Veteran Devcon attendees will remember a similar panic from previous events, including Devcon III in Cancun, Mexico, where

Is this FUD or a legit concern? Let’s dig in.

Question: Is this a credible threat, in which there is a concentrated effort to target Devcon attendees, or is this FUD?

If we follow the Tweets, the picture is unclear.

This year Devcon security panic seems to have started with news outlets picking up a tweet from crypto_mackenna.

However, it’s worth note the article in question doesn’t mention Crypto_McKenna follow-up Tweet reply on that same day which balances the original Tweet.

Also, some sensational crypto influencer tweets that we’ll ignore. Mainly because they are purely opinion based, don’t provide any credible evidence of a threat, and are likely just ego-feeding clout farmers. I mention them because it is essential to understand and acknowledge that they play into the overall perception and conversation, even if they hold little substance and merit. 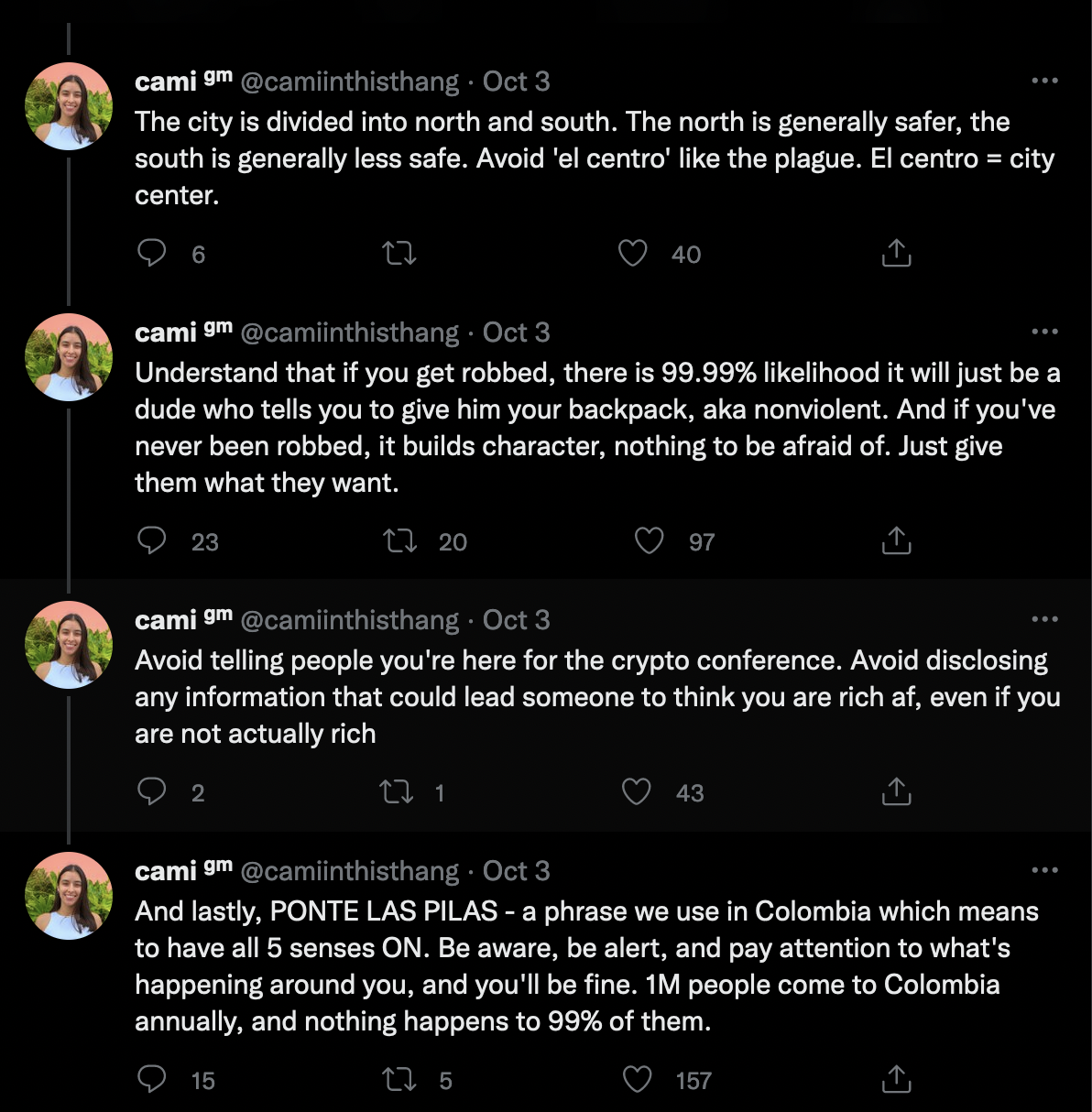 Good OPSEC at conferences in general

While those are important and contain good information relevant to staying safe in Bogota, I thought it might be helpful to dig deeper and tap into the wealth of existing information on conference OPSEC.

OPSEC for Defcon #1 from Darkangle.net

Before we continue, you should understand that everyone’s security needs are not the same.

ZW: What is the personal threat model? Most crypto people don’t need to defend against nation states.

ZW: Physical access to a device opens a lot of new threat vectors and can make things a lot easier for an attacker.

ZW: take inventory of what’s on your devices. Leave your noods at home..

ZW: You should have your HDs encrypted or know they are trivial to access.

Wrapping it all up

On any given day now, I receive more Spam Likely calls than I do real/legit calls. While this anecdotal observation is likely specific to my number, how common is this? Nocoiners often point to the epic number of scams in crypto, which is no doubt a severe problem, but other technologies are not free from spam/scams, either. This is a modern problem across various mediums. Crypto is newer and has a more direct path to profits, so it’s especially awful.

The seven companies have two weeks to address the agency’s concerns. Otherwise, compliant carriers will have to block their incoming traffic.

I, Degen - Personal Hack Attempt of the Week

We do our best to report accurately on the topics we discuss but we’re not always going to get everything right. Please comment here or reach out to us @idegenfm with corrections or comments!