Listen to I, Degen E#19 directly on idegen.fm, on Spotify, Apple Podcasts, or various other places.

Finally, a break in the storm as things calmed down in the third week of a brutal October. This week, we will discuss the Moola Markets price manipulation and the Cosmos vulnerability. We’ll dive deep into a few choice DEVCON 6 security talks and follow the rabbit hole from one of the talks into decentralized threat intel bots. I, Degen - Weekly Crypto, Security, & Other News Headlines of Interest

Using initial funding of 243k CELO (~$180k), the attacker supplied 60k CELO in order to borrow 1.8M of the protocol’s native token, MOO, which could itself be used as collateral to borrow against other assets.

Then, using the remaining CELO to buy MOO on Ubeswap, the attacker pumped the price of their MOO collateral allowing them to borrow the remaining assets on the protocol, draining all liquidity

A chain is safe from the critical vulnerability as soon as ⅓ of its voting power has applied the patch. Chains should still seek to patch to ⅔ as quickly as possible once the official patch is released.

No reports of exploitation in the wild.

The article also notes that fewer hacks have taken place on Cosmos. I wonder why that is? 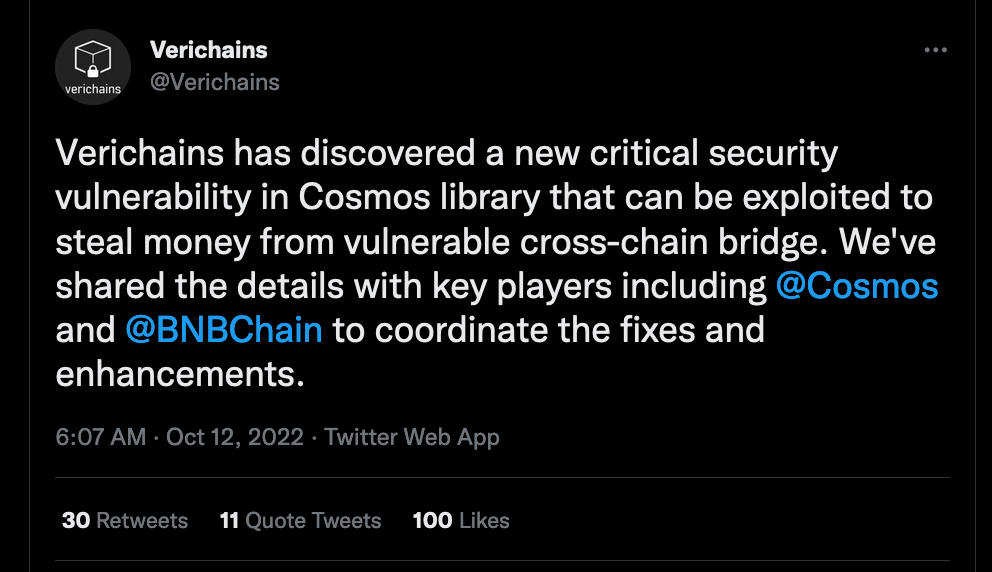 Recently, the core Cosmos team became aware of a high-severity security vulnerability that impacts all users of the IAVL merkle proof verification (“RangeProof”) system, for all versions of the IAVL software.

Nice work to all involved to uncover and path these before exploit.

RayNetwork, a DeFi ecosystem for Cardano was attacked.

On October 3 and October 10, 2022 an attacker attacked RayStake by spoofing a stake key in the payment address, causing the vending machine to send rewards of a specific stake key to the attacker’s address.

This was a new Bond Protocol contract that was still in testing. So, there were limited funds in the pool.

The hacker has returned all of the stolen tokens. The team successfully tracked the perpetrator, after which the hacker agreed to return the funds, a spokesperson from Olympus DAO told The Block.

According to court documents, Meiggs and Harrington targeted executives of cryptocurrency companies and others who likely had significant amounts of cryptocurrency and those who had high value or “OG” (slang for Original Gangster) social media account names.

Detection Methods - - alerts to monitor for large flows of funds 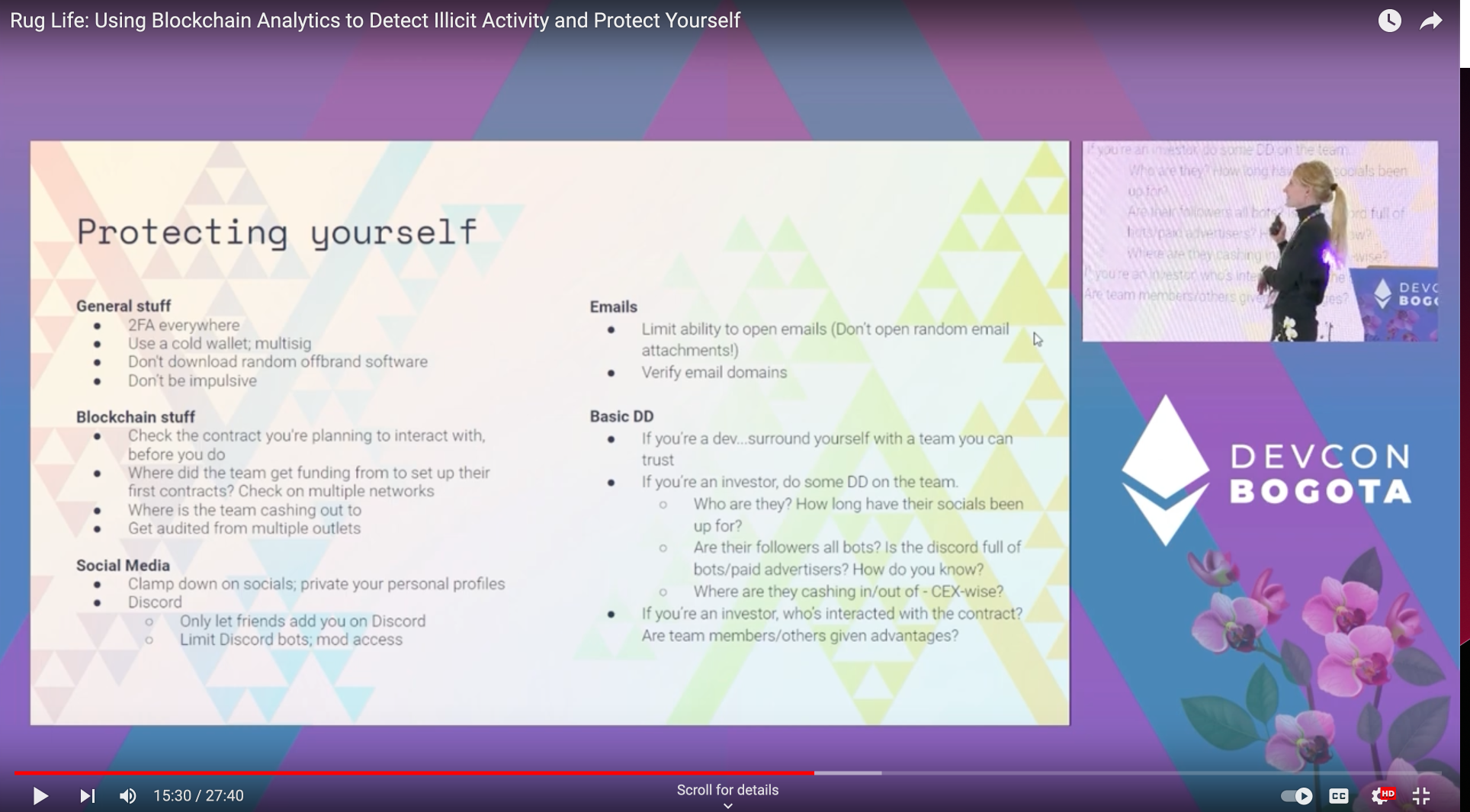 2. Crosschain Security Considerations for the Degen in All of Us

Crosschain applications (xApps) are often considered too risky, but this viewpoint is divorced from reality. People will use these applications and it is our responsibility to understand the security implications. xApp developers must be able to reason about concurrency and asynchrony across two different networks, as well as understand the trust assumptions introduced by the data transport layer. By understanding this, we can allow users to engage in risky behavior in the safest way.

Generally, in economics, a contagion is the spread of an economic crisis from one financial institution, market, or region to another.

Validation of consensus and state transition is coming soon and will likely be the gold standard but not ready for prime time yet. 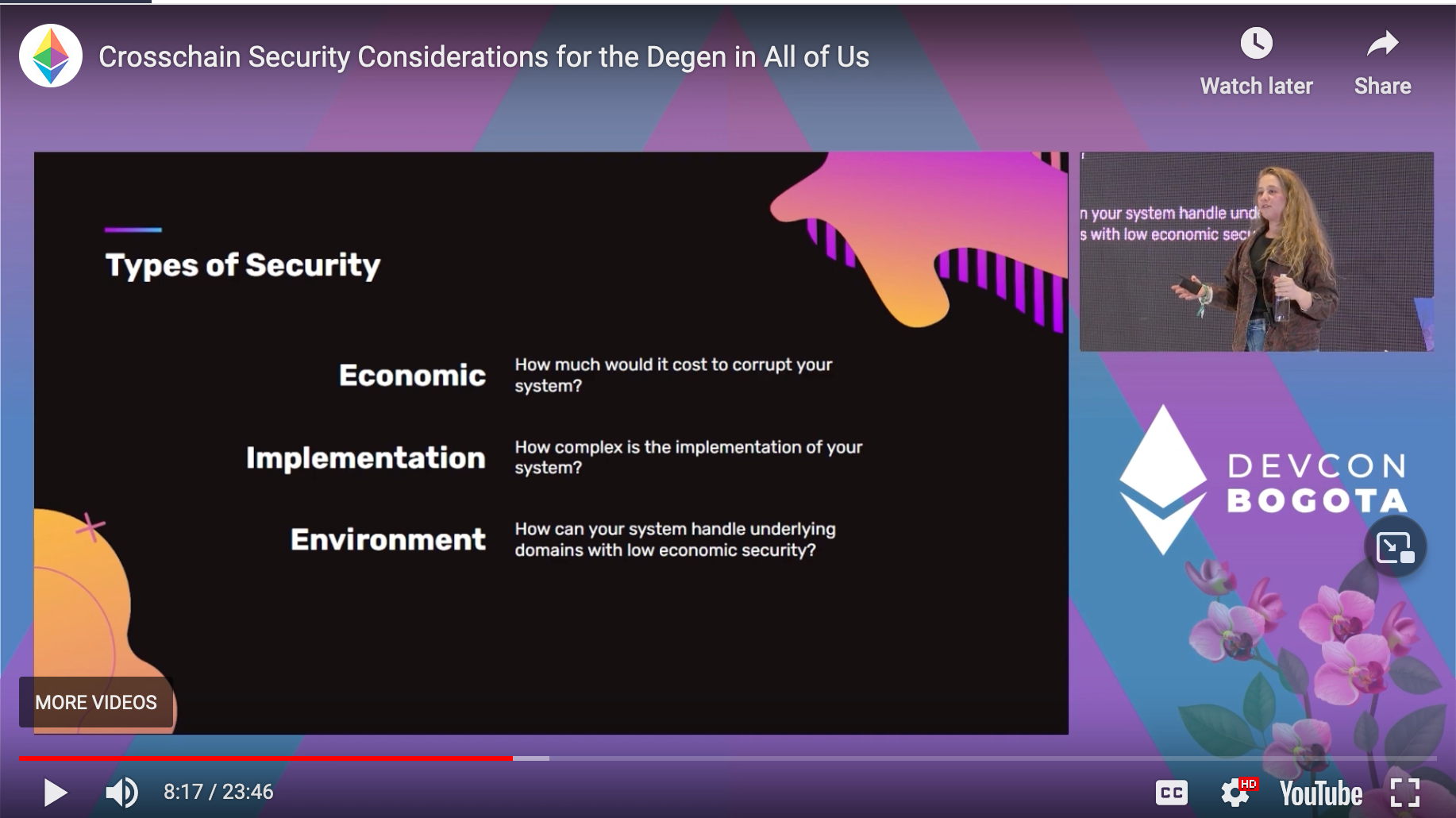 Most bridge hacks we see now are Implementation based.

What can users do? 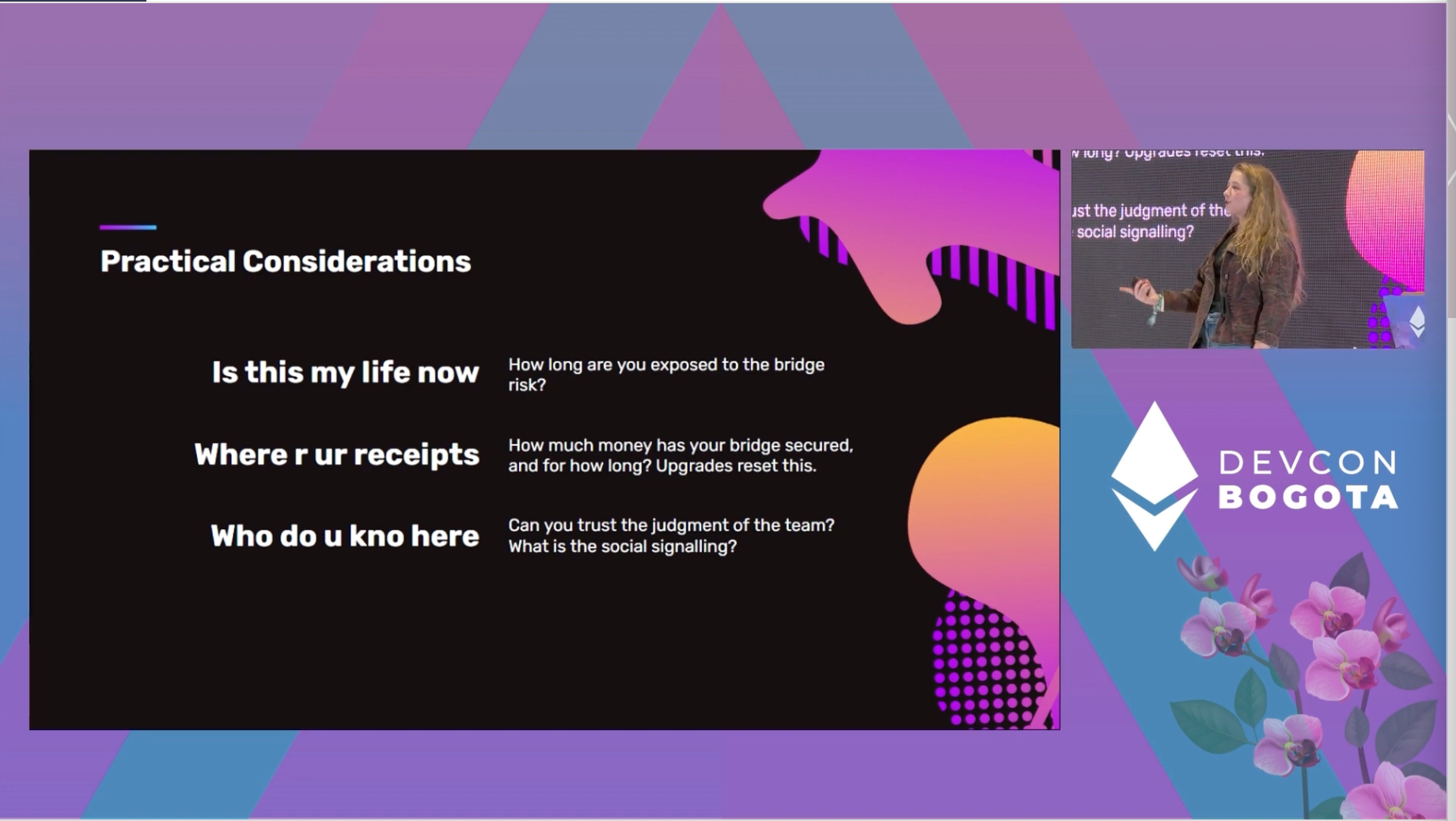 Lindy Effect is a theorized phenomenon by which the future life expectancy of some non-perishable things, like a technology or an idea, is proportional to their current age.

Decentralized threat detection bots are a recent area of research and development for protecting the ecosystem. This talk will cover concepts and recent research on detection bots and implementation patterns including heuristic-based, time-series based, multi-block, and TX simulation. Examples involving prior exploits will be included, as well as tools, limitations, the potential for automated threat prevention, and areas for further research. 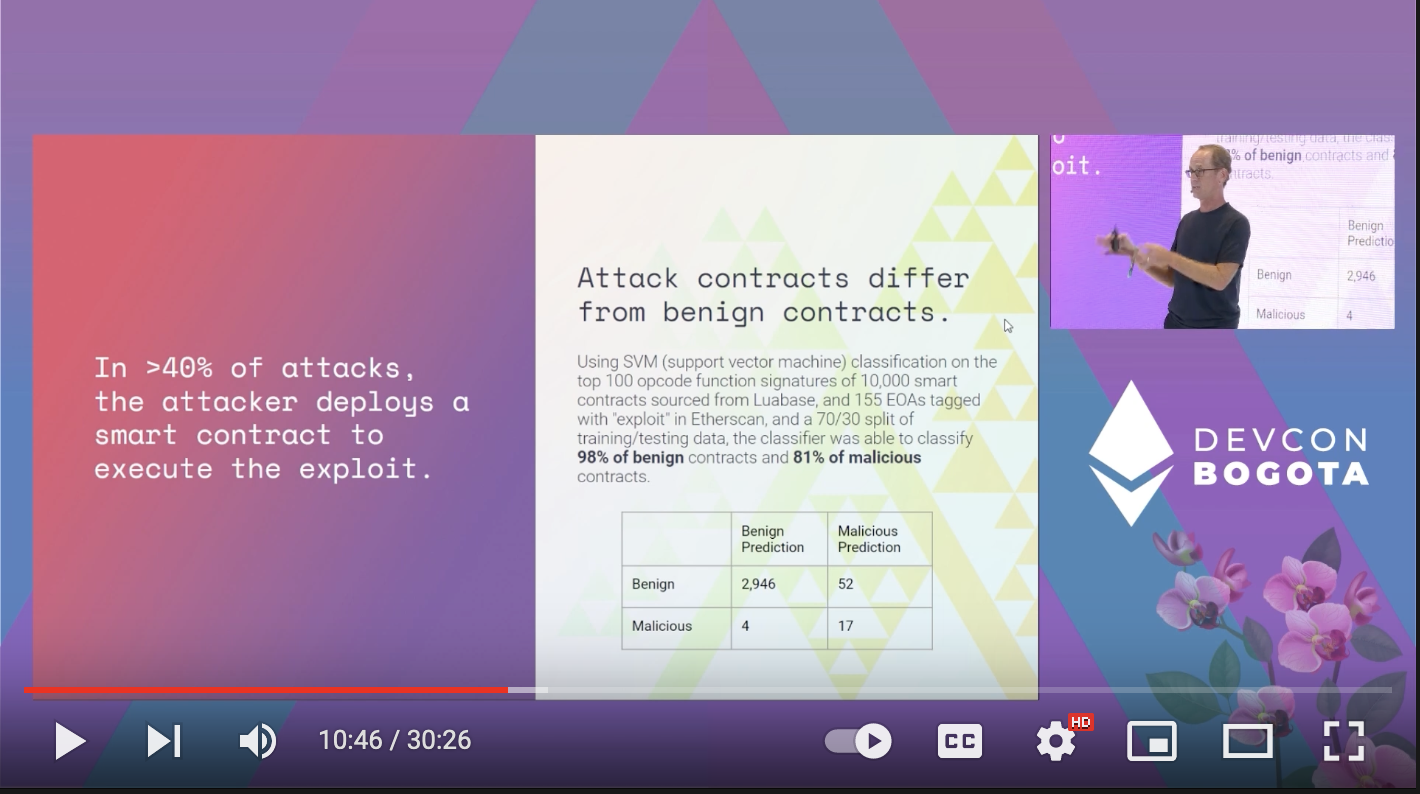 Fraud-based attacks like Ice Phishing can predict with 95% precision with heuristics!

This opens the question up:

Other Cool Devcon 6 Talks we reviewed

Bored Ape Yacht Club Discord hacked, Ronin Bridge compromised, the news articles are fraught with Ethereum exploits. Chainalysis has identified that these attacks are often executed by a small circle of well-funded, well-coordinated adversaries. In this session, Chainalysis examines how these actors operate, how we investigate the flow of funds to try to disrupt attacks, and how the web3 community can work together to raise costs for attackers using the transparency of public blockchains.

Tether Approval Scam - 83MM in a year! more than 20k victims have been tracked in connection with scam.

It would be interesting to see if we can find proof of this. 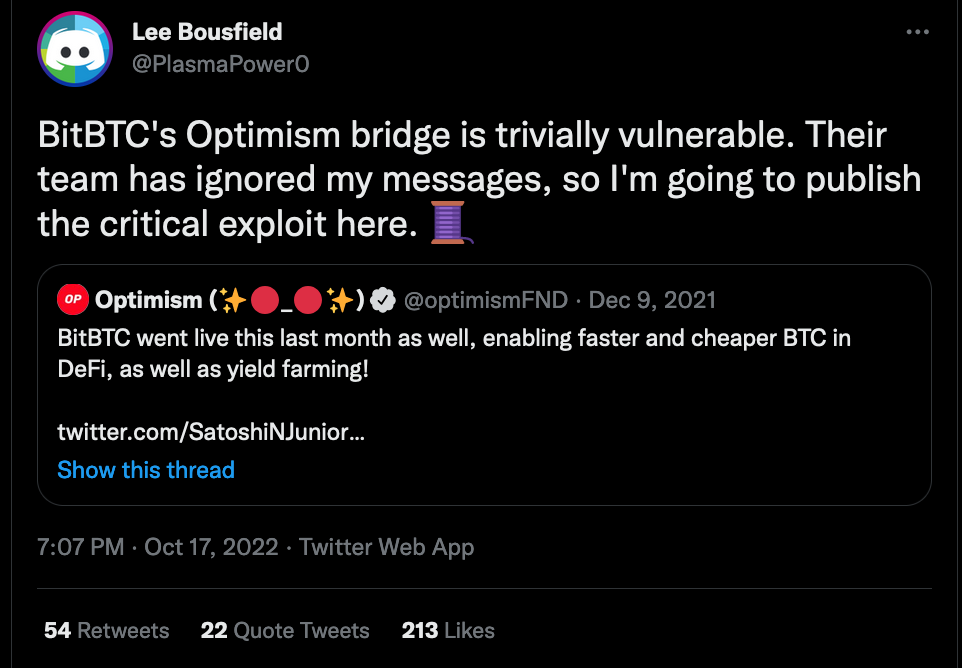 We do our best to report accurately on the topics we discuss, but we’re not always going to get everything right. Please contact us @idegenfm, @WolfDeFi, @Hunthk11 with corrections or comments!